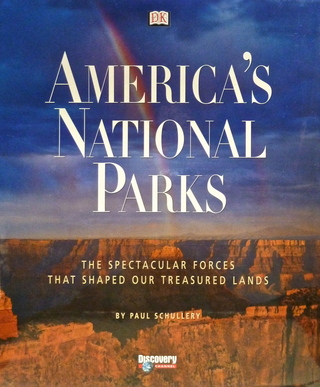 America's National Parks: The Spectacular Forces that Shaped Our Treasured Lands is a real Buick of a book. Brace up your coffee table for this oversized, gorgeously produced literary and photographic celebration of the American national parks. Organized around the origins of the parks's landscapes—whether sculpted by glaciers, piled up in volcanic fires, excavated by ancient rivers, or otherwise formed by prodigious natural processes—this book introduces the full array of the forces behind the beauty and wonder we find in each park today. Each park's individual chapter features an introductory text by Paul Schullery, and profuse illustrations (including several dramatic interpretive fold-outs) with copious notes and captions by nature writer Thomas Schmidt.

Excerpt from America's National Parks: The Spectacular Forces that Shaped Our Treasured Lands, from the "Introduction" to the volcanic parks:

Volcanoes are the products of plate tectonics—processes at once so elegant and messy, so vast and deep, that they force us to re-imagine the volcano as little more than an after-effect. They also make us wonder if geology might at times be more a conjectural art than a hard science, and if today’s scientific analysis may be tomorrow’s embarrassing bad guess. For the moment, we can take great comfort in knowing that our understanding of how the planet builds its landscapes has advanced tremendously over even fifty years ago, and that we are learning more all the time.

The earth’s lithosphere, that brittle outer layer of the planet that is at most only a few dozen miles thick, is composed of an extraordinarily lively set of plates that slide and over-ride and jostle one another like hot cakes jammed too tightly on a griddle. In a planetary drama on a scale almost beyond our comprehension, the collisions and frictions of these plates generate enormous amounts of energy, heat, and movement.

The great majority of our volcanic national parks are associated with the Pacific Ocean, especially its “hot spot” island chains and its famous “Ring of Fire.” Haleakala, Hawaii Volcanoes, and National Park of American Samoa are the products of hot spots on the tops of columns of molten rock that rise to the earth’s crust from deep within the planet. These “plumes” of magma probably originate at the outer edge of the earth’s core, some 1,800 miles below the surface. The great crustal plates whose upper surfaces make up the continents and sea-bottoms slide over the athenosphere, the outermost part of the earth’s mantle. The athenosphere is often warm and permeable enough that molten rock can rise through it from below and create a “lubricated” surface over which the plates can move in a motion that scientists liken to a conveyor belt or treadmill.

Where plumes of molten rock from deep within the planet actually break through the plates—to become recognizable hot spots—they become volcanoes, and disgorge huge quantities of lava onto the surface. The Pacific island parks are the result of this process.

Yellowstone, far inland from the Pacific, is also the sign of a hot spot that has recurrently erupted for millions of years, leaving a long trail of volcanic features across the landscape of the West. There is still some question if the Yellowstone hot spot reaches as deeply into the earth as most others, but the effect on the surface is at least as spectacular. There is no other continental area on the planet with an equal record of volcanic activity as the Yellowstone plateau.

But hot spots are by no means the grandest volcano factories. For wholesale volcanism, it’s hard to beat subduction, where one plate is slowly sliding under another. Along the Pacific shore of the United States, subduction has produced the long mountain chains that include most of our other volcanic parks—Katmai, Lake Clark, Mount Rainier, Crater Lake, and Lassen.

Katmai and Lake Clark, on the Alaska Peninsula, rise from the subduction of the great Pacific Plate, which is slowly (a couple of inches a year) slipping under the North American Plate. As the Pacific Plate moves deeper under the continent, the unbelievable pressures and heat of the motion, coupled with the energy of hotter, deeper layers of earth, reduces the solid rock of the plates to magma, which is then buoyed back toward the surface, either bulging straight up toward the surface or oozing and angling up through existing faults and passages to become erupting volcanoes.

The same effect is produced in Washington, Oregon, and California. Here huge oceanic plates are likewise sliding under the dry-land plate of North America. Sometimes the result is just an ominous reminder of the planet’s instability—like the Seattle earthquake of early 2001. But over the long geological haul, earthquakes aren’t enough to ease the pressures and energies of this friction. Landscapes shiver, bulge, and subside, but ultimately nothing short of a volcano, or several volcanoes, will settle the earth for a while. The leading edge of plate-melting action in this region seems to be directly underneath the famous volcanic peaks of the Cascades Range.

In the southeastern United States there is one more representative volcanic park, Hot Springs, where what we see on the surface is an especially mild effect of the earth’s internal fires. Water, having seeped only a mile or two below the surface, is both heated and purified for its return to us as a mild but persistent reminder that even in quiet lands, the deep fires are not gone.