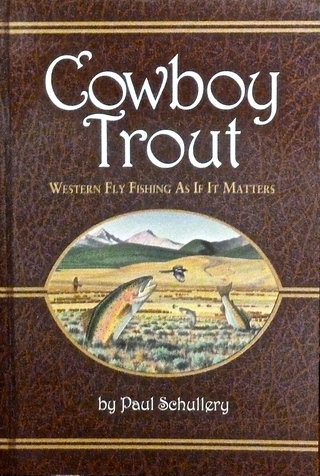 Cowboy Trout: Western Fly Fishing As If It Matters

The American West, a land of outsized legends and powerful regional identity, has attracted the attention of countless professional historians, to say nothing of hordes of passionate history buffs. It is surprising then, considering the enormous amount of energy, money, and enjoyment generated by the region's fabulous fly-fishing opportunities, that so little attention has been paid to this signature western sport by historians. The West's colorful and surprisingly long (fly rods arrived in the Rockies more than 150 years ago) history has been little studied except by a handful of angling writers, some of whom also happened to be historians. Paul Schullery's Cowboy Trout: Western Fly Fishing As If It Matters, while calling attention to this shortage of historical celebration, does something even more important. It brings to colorful and entertaining life a goodly number of sadly neglected episodes and adventures of the pioneers of western fly fishing. From first attempts to imitate the ubiquitous salmon fly to the first flies cast in Yellowstone to the spreading social and economic ripples of Norman Maclean's masterful A River Runs Through It, Schullery illuminates the western angling scene, ever alert to point out the countless opportunities for additional study, thought, and enjoyment as we try to come to terms with the modern western fly-fishing scene.

No one has been a more zealous gadfly to the sacred cows of fly fishing than Paul Schullery. No easy or self-serving theory, no fatted calf or swollen ego has escaped his scrutiny. Cowboy Trout continues his "willful resistance" to the fashionable. He nips at Norman Maclean and Edward Hewitt, offers memorable glimpses of important fly fishers, and, uniquely, amply, explores fly-fishing's western tradition. The book is not to be missed.
Nick Lyons

Excerpt from Cowboy Trout: Western Fly Fishing As If It Matters, from the "Conclusion:"

In the 1659 edition of The Art of Angling, Thomas Barker (who described himself as “an antient practitioner in the faid Art”) explained the “principall fport” of fishing for pike. It was a method startling in its originality—Barker said that it was “the greateft pleafure that a noble Gentleman in Shropshire giveth his friends for entertainment.” The goal was to snag a pike with a very large bare hook, and the “fport” arose from tying the other end of the line to a goose. The two animals would then tear up the pond—towing each other around in a blind panic—apparently to the vast entertainment of the noble gentlemen. At least Barker assured his readers that “there is no doubt of pleafure betwixt the Goofe and the Pike.”

Well maybe, but not for the goose or the pike. It must have been terrifying for them. And yet, I suspect that even today, when most of us would agree that such awful treatment of animals is nothing short of immoral, and when almost all of us would be unwilling to snag the pike in the first place, there are some among us who wouldn’t mind seeing such a contest—maybe, just once. As terrible a thing as it was, perhaps late at night when our resistance is down, it still has a certain barbaric appeal—like professional wrestling, or Jerry Springer—even though we know better.

Sport changes that way, with rarely a perfect break from the past. Sport’s evolution is as sloppy and troubled as any other social process. We don’t all get together one day and abruptly agree that we need to do things differently. Some of us grow uneasy about something, and gradually we give it up. Eventually, if many people get to feeling strongly about it, a new code of behavior emerges. If the code has sufficient emotional urgency and political momentum it becomes law. Sometimes these changes start slowly, or languish for a long time, or even die out. Other times, there's a sudden sense of urgency, things reach a flash point, and we look around and realize we're not who we used to be.

One fall day about thirty years ago, I was driving along the North Umpqua River in Oregon when I saw a fly fisherman on the opposite shore playing a steelhead (a sea-going form of rainbow trout that returns to fresh water to spawn). I pulled over and got out to watch. Just as the fish was tiring, another car pulled up and four men got out and joined me.

The fisherman worked the steelhead into the shallows and gently gripped it underneath. It looked to be a ten-pound fish, sleek and bright. The fisherman quickly worked the hook free and held the fish in the shallow water for a moment, admiring it.

But when he aimed the fish back toward the deep water and eased it to freedom, a chorus of gasps rose from the men near me. They walked back to their car shaking their heads. As the last one turned to go he snorted and said, "He must be one of them sportsmen."

What engages my interest here is not if the fisherman should have let the fish go, or if the men were wrong in disapproving of him. What is more interesting is what the situation reveals about angling society and its internal complications. The fisherman returned a fish to the river, a big strong fish that any one of these men might very well catch the next day. It would seem he did them a favor. But the continued availability of that fish was less important to them than the statement that the fisherman was silently making about his definition of sport—and, by implication, about theirs.

The man who made the sarcastic remark about "them sportsmen" was speaking against a movement, not an individual. It was a telling moment for me, because up to then I didn't fully realize that such hostilities existed within the so-called “fraternity” of anglers. Those hostilities were part of a very important change that was just then gaining new national momentum in trout fishing—a movement away from the gratuitous routine harvest of every good fish you catch. The fisherman and the watchers were all a part of that change, he as a convert, they as the resistance.

What also engages me about stories like this one, and the previous one about the pike and the goose, is the extent to which this whole messy business of angling society—its debates, its value systems, and its unceasing change—is ripe for our consideration, our introspection, and our enrichment. For a variety of reasons, I think that ripeness is especially attractive and promising here in the West.