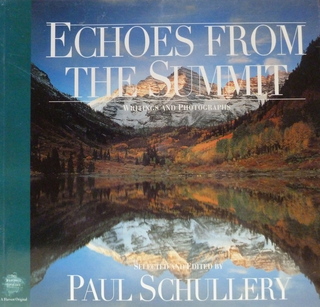 Echoes from the Summit: Writings and Photographs

In Echoes from the Summit: Writings and Photographs, Paul Schullery has collected historic and modern literary celebrations of the high country, paired with dozens of spectacular color photographs of mountain country around North America. The authors include Henry David Thoreau, Rick Bass, Doug Peacock, Mark Spragg, Ruth Rudner, Harry Middleton, Sigurd F. Olson, John Muir, and Schullery himself. The result is a sampling of the full breadth of emotional, spiritual, and intellectual responses we have to life in, among, and at the highest levels in mountain country.

Excerpt from Echoes from the Summit: Writings and Photographs, from Paul Schullery's "Introduction: The Life of the Mountains:"

We are blessed with mountains. I can’t imagine living in a country without them. Whether I am hauling my grouse gun up some rounded old New England peak, exploring some redrock mesa in the Four Corners Country, or drifting a fly through a likely stretch on a high-Sierra brook, I feel the peculiar power of the uplands.

At the same time, I’m reminded of our enduring relationship with these places. In some unlikely, bramble-ledged hollow on that New England mountain I suddenly come upon a century-old stone fence and a few ancient apple trees, where once a family made this slope their own, then gave it back to the forest. Everywhere in the Southwest, PreColumbian human habitations are carved into the redrock, standing in tilting weathered walls, or buried under shallow soil mounds. And when a trout takes my fly at 9,000 feet in the Sierra, it’s a non-native brook trout brought to this water in the 1800s by restless non-native people for whom the native fish were not enough.

We are likewise blessed with mountain writers. As long as I’ve been old enough to travel these places, I’ve loved sharing them with earlier visitors who took the trouble to write down how it all felt to them. The literature of mountains, a huge, diffuse body of adventure, reflection, and wisdom, is a national treasure no less than are the mountains themselves. It is distinguished from most other topical literatures by its scattered sources. Whether you read textbooks of ecology and geology, the adventure writings of hunters and fishermen, the conservation tracts of our great professional resource managers, the harrowing, cliff-hugging accounts of the technical climbers, the passionate essays of our naturalists, or the personal reminiscences of countless other mountain people—ranchers, rangers, storekeepers, and no end of drifters, part-timers, river-rats, and hermits—you are likely to run into the praise of high country.

Has there ever been a human culture not intrigued with high places? Any time our landscape climbs, be it a low ridge on the prairie or a horizon-splitting peak, we are attracted to the top, even if we only look and wonder what it’s like up there. For as long as humans have had even a spark of wonder in our souls, we have sought these places for solitude, for inspiration, for vision, and just for this vague urge we have, to get the best possible view.

That vague urge may be the most interesting impulse of all. It takes little imagination to wonder if our desire to see things from the top isn’t a leftover behavioral trait from the Pleistocene, when we shared the world with predators who were faster and stronger than we, and only our ability to understand our world gave us an edge. In that world, high places were both refuge and lookout: the best spots from which to keep watch, for both our predators and the prey we shared with them.

The road from that hilltop to modern mountain appreciation is a long and complicated one. It’s easy to see the immense pyramids of both the Old and New World as artificial hills, which they were: ceremonial eminences that emphasized the power, even the otherworldliness, of whoever ran the temples on top. This is easy for me to appreciate. Whenever I visit any of the remaining moundbuilder sites scattered up and down the Mississippi Valley, I’m disappointed if the regulations forbid me from climbing to the top of these thousand-year-old monuments. I don’t know what I expect to gain from getting up there, but I know it’s the right place to be.