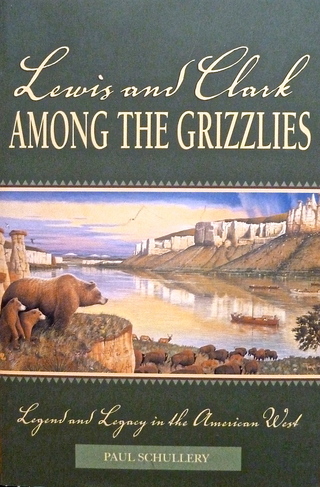 Lewis and Clark Among the Grizzlies: Legend and Legacy in the American West

Of all the perils and wonders encountered by Lewis and Clark's Corps of Discovery when they crossed the American continent two centuries ago, non so perfectly represents the enduring mystique of the western wilderness as does the grizzly bear. In this thoughtful, deeply researched, and adventure-filled book, historian-naturalist Paul Schullery honors the expedition's profoundly important scientific and cultural contributions to our idea of the grizzly bear. The first book to exhaustively explore both the discoveries made by the Corps of Discovery as they encountered these magnificent and perilous animals, and the misunderstandings that grew from the Corps' reports of grizzly bears, Lewis and Clark Among the Grizzlies: Legend and Legacy in the American West is a significant contribution to the lore and scholarship of the Lewis and Clark Expedition and the North American grizzly bear.

"Just when you think you have read everything about Lewis and Clark, along comes Paul Schullery's remarkable book about Jefferson's explorers and grizzly bears. [This book] is sure to find its place on the short shelf of Corps of Discovery essential books."—Dr. James P. Ronda, University of Tulsa, author of Lewis and Clark Among the Indians

"Author Paul Schullery—probing historian, meticulous scholar, passionate student of bears, and joy raconteur—is the first author to thoroughly ask what Lewis and Clark's experiences revealed regarding the great bears and the men who encountered them. Schullery probes for the truthy yet keeps the power of the grizzly alive in his writing."—Dr. Steven Herrero, University of Calgary, author of Bear Attacks: Their Causes and Avoidance

"Paul Schullery is not only one of the most prolific western historians writing about nature and the West, he's also one of the best. This time his topic—Lewis and Clark and the great western bear—is a fascinating combination for modern readers, one he handles with down-to-earth sophistication. The result is not just readable, but full of insights from the new field of environmental history."—Dr. Dan Flores, University of Montana, author of The Natural West

Excerpt from Lewis and Clark Among the Grizzlies: Legend and Legacy in the American West, from Chapter Sixteen, "Legacies:"

There is a poignancy to our vicarious adventures when we read the journals of the Corps of Discovery. Today's grizzly bears live in a tiny, pathetically restricted fragment of the habitat they occupied when Lewis and Clark met them. When we travel the Lewis and Clark trail we visit a former grizzly bear kingdom now lost under cities, ranches, and the very civilized landscapes that the captains and their president could only dream of. I suspect that if the three—Lewis, Clark, and Jefferson—could be transported to the upper Missouri today and could see what has become of the country they worked so hard to open up to settlement and society, they would be quite pleased. But I also like to imagine that Lewis, or perhaps more likely Clark, would feel a few twinges of regret at what was gone. Jefferson never saw it, but Lewis and Clark would remember.

It may be the final irony of the Lewis and Clark story that many of us are no longer as confident as they must have been that native humans, and grizzly bears, and bison herds, and all the rest of that earlier America should have to give way to industrial agriculture, to an urban order, and to such foreign ideas of proper human lifeways. We are, at least many of us, less confident about the righteous inevitability of all these changes. We aren't all that sure what we would prefer had happened instead, but when we read Lewis and Clark we pause to wonder if something has in some way gone wrong. We read books about returning the bison herds to the Great Plains, and even if we react with skepticism or complete disapproval we find the notion kind of satisfying. We stand along the Missouri River, and where there are now dams and roads and cities we feel a vague longing to see what Lewis and Clark saw. Sometimes we can still see much of what they saw, and we strain to imagine the rest.

Grizzly bears are gone from almost every mile of the routes traveled by Lewis and Clark. The bears survive only in isolated enclaves—a few mountain sanctuaries—places that at best the captains may have viewed from a hazy distance. The bears were gone long before we were born, but in some achingly vague, intergenerational way, we seem to recall them, and even miss them. In their absence these bears have become even more powerful symbols of the landscape than they were when they still roamed it so confidently. They are symbols not only of something lost, but of something we might decide to have again. Perhaps some day, we wonder, it might be possible to travel a least a few stretches of this immense, generous river and again have the chance Lewis and Clark had—to encounter this terrible, beautiful, unforgettable animal. What a discovery that would be.