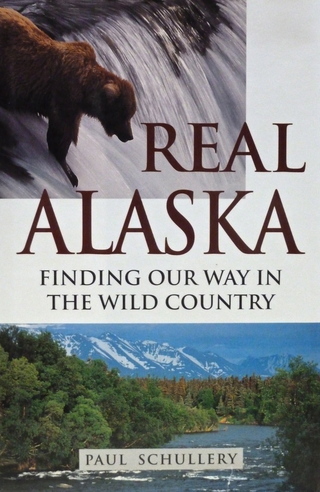 Real Alaska: Finding Our Way in the Wild Country

Wild nature enchants us with its beauty, shocks us with its violence, and haunts us with its freedom. We long to connect—to somehow embrace and honor wildness—but we each must find our own way. In Real Alaska: Finding Our Way in the Wild Country, celebrated naturalist and storyteller Paul Schullery takes us into the heart of wildness, Alaska’s Katmai National Park, in search of “the most powerful spiritual euphoria available.” There, along a dream-perfect river, among the bears, ecotourists, salmon, and rangers, his misadventures and inquiries expose the fragile tapestry of hopes behind our need for nature. At once funny and frightening, alarming and hopeful, Real Alaska urges a new tolerance among those who love nature but not each other, and demonstrates again why Paul Schullery has been called “America’s foremost citizen of the national parks.”

"An armchair excursion to Alaska with Paul Schullery as your guide is a wondrous experience. You won't catch a salmon, and you needn't fear being jumped by a giant bear—but Real Alaska renders these experiences so vividly that the thrill and terror make the heart race. Schullery's consideration of the dilemmas inherent in managing national parks in truly wild places is fair, tough-minded, and fascinating. This is a valuable book."—Thomas McNamee, author of The Return of the Wolf to Yellowstone and The Grizzly Bear

"Schullery, a great historian and naturalist, examines the connections between people and nature, providing a remarkable analysis of the natural and cultural resources of Katmai National Park, and the Last Frontier."—Gary Brown, author of The Great Bear Almanac and Outwitting Bears

Excerpt from Real Alaska: Finding Our Way in the Wild Country:

Under the shady canopy of an old birch just to the right and uphill a little way from the gate, one of the big, light brown bears was standing broadside to us, watching us approach. Later examination of the spot suggested that I was perhaps fifty feet from him right then. Maybe it was more. It seemed like less.

In many years of wandering in bear country, I have seen a number of grizzly bears at various distances in the backcountry, and even jumped a couple that immediately ran off, but I had never found myself face to face with one this close. Neither had Marsha. Over those years, I had plenty of time to think about what I would do when this happened. I had read hugely in both the scientific and the popular literatures on bear encounters. I had talked to experts, to people who had had such encounters and walked away, and even to a couple of mauling victims. I had made many miles of noise to avoid such an event. I absorbed all the advice, considered the odds of each possible tactic working or failing, and developed such habits as could be cultivated, such as being especially careful near noisy stream courses and on windy days, and always keeping an eye out for tracks, scat, diggings, and big, climbable trees.

But I knew that no amount of planning provided reasonable assurance that my personal reaction would be the right one, or even a sensible one. This isn’t because the advice wasn’t good or because habits aren’t worth developing. It is because inside each of us is a different person that we don’t know very well, and that person is just waiting to come out and surprise us with some strange combination of fright, fortitude, common sense, and idiocy when it is finally our turn to meet the bear. “What do you do when you meet one?” had been a favorite bear-related question asked by many of the campers to whom I gave evening campfire programs during my ranger-naturalist days. My stock answer was that I didn’t know what they were going to do, but I didn’t think it would be a problem for me because I fully expected to faint.

When it finally happened there at Scary Hill, my reaction was, sad to say, much more prosaic than that. Briefly and softly, yet emphatically, I swore. It was entirely involuntary, no thought or creative phrasing involved. I just said, “Oh shit.” This caused Marsha to glance up from the rough trail’s uneven footing, look past my shoulder, and see the bear too, but her reaction was more restrained. The bear showed no reaction at all.

We stood there only a few seconds before I said, “Let’s just walk back.” We turned around and moved back up the trail onto the ridge where the bear was no longer in sight. There we stopped and did as good a job of milling around uncertainly as two people could. We had not seen the bear move the whole time.