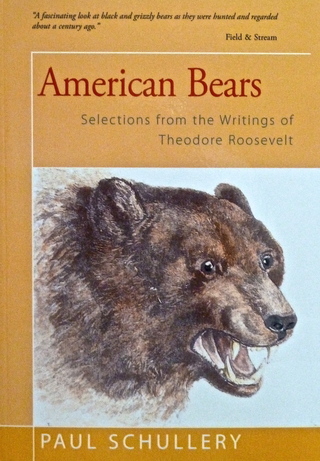 American Bears: Selections from the Writings of Theodore Roosevelt

Though now remembered in light caricature for his flambuoyant presidency, his war adventures, his hunting experiences, and his trust-busting, Theodore Roosevelt was in fact a complex and many-faceted individual; among other things he was the first American president to win the Nobel Peace Prize. And he was an extraordinary naturalist, mixing a wealth of valuable and at times original nature writing into his exciting books of hunting adventure. While researching both TR and bears, Paul Schullery discovered that when gathered together, TR's writings on bears amounted to the foremost contribution to the literature of American bears up to his time. TR had not only a considerable personal experience with bears, but even more important was his rare sense of discernment in sorting out the trustworthy natural history from the wild and often goofy folklore that bears generate in any human society that encounters them. Thus TR's bear-related writings, all gathered here in book form for the first time, give us an unparalleled glimpse into the world of American bears a century ago, and a closer look at a neglected aspect in the career of a great American nature writer who also happened to be the twenty-sixth president of the United States. American Bears: Selections from the Writings of Theodore Roosevelt has gone through several cloth and paperback editions, beginning as a dual main selection of the Outdoor Life Book Club in 1983. The most recent edition was produced as an Authors Guild Backinprint.com edition in 2012.

"A fascinating look at black and grizzly bears as they were hunted and regarded about a century ago."—Field & Stream

"Roosevelt's descriptions of bear life are valuable both as literature and as natural history. On one level, this book is simply good reading. On other levels, American Bears reveals much about the wilderness, wildlife, and a great man who interacted with both."—John Allen Gable, Executive Direction, Theodore Roosevelt Association

The king of the game beasts of temperate North America, because the most dangerous to the hunter, is the grizzly bear; known to the remaining old-time trappers of the Rockies and the Great Plains, sometimes as "Old Ephraim" and sometimes as "Moccasin Joe"—the last in allusion to his queer, half-human footprints, which look as if made by some misshapen giant, walking in moccasins.

Bear vary greatly in size and color, no less than in temper and habits. Old hunters speak much of them in their endless talks over the camp fires and in the snow-bound winter huts. They insist on many species; not merely the black and grizzly, but the brown, the cinnamon, the gray, the silver-tip, and others with names known only in certain localities, such as the range bear, the roach-back, and the smut-face. But, in spite of popular opinion to the contrary, most old hunters are very untrustworthy in dealing with points of natural history. They usually know only so much about any given game animal as will enable them to kill it. They study its habits solely with this end in view; and once slain they only examine it to see about its condition and fur. With rare exceptions they are quite incapable of passing judgment on questions of specific identity or difference. When questioned, they not only advance perfectly impossible theories and facts in support of their views, but they rarely even agree as to the views themselves. One hunter will assert that the true grizzly is only found in California, heedless of the fact that the name was first used by Lewis and Clark as one of the titles they applied to the large bears of the plains country round the Upper Missouri, a quarter of a century before the California grizzly was known to fame. Another hunter will call any big brindled bear a grizzly no matter where it is found; and he and his companions will dispute by the hour as to whether a bear of large, but not extreme, size is a grizzly or a silver-tip. In Oregon the cinnamon bear is a phase of the small black bear; in Montana it is the plains variety of the large mountain silver-tip. I have myself seen the skins of two bears killed on the upper waters of the Tongue River; one was that of a male, one of a female, and they had evidently just mated; yet one was distinctly a "silver-tip" and the other a "cinnamon." The skin of one big bear which I killed in the Bighorn has proved a standing puzzle to almost all the old hunters to whom I have showed it; rarely do any two of them agree as to whether it is a grizzly, a silver-tip, a cinnamon, or a "smut-face." Any bear with unusually long hair on the spin and shoulders, especially if killed in the spring, when the fur is shaggy, is forthwith dubbed a "roach-back." The average sporting writer moreover joins with the more imaginative members of the "old hunter" variety in ascribing wildly various traits to these different bears. One comments on the superior powers of the roach-back; the explanation being that a bear in early spring is apt to be ravenous from hunger. The next insists that the California grizzly is the only really dangerous bear; while another stoutly maintains that it does not compare in ferocity with what he calls the "smaller" silver-tip or cinnamon. And so on, and so on, with out. All of which is mere nonsense.