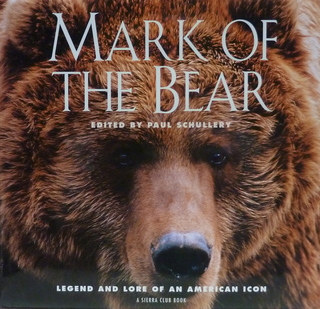 Mark of the Bear: Legend and Lore of an American Icon

Mark of the Bear: Legend and Lore of an American Icon is a beautiful, stirring collection of ten original or previously published essays by leading American nature writers that celebrate the spirit, wonder, and hard realities of bears. Collected and edited by Paul Schullery, the book is a tribute to the wild, romantic image of black and grizzly bears. Essays by Ernest Thompson Seton, Rick Bass, Gretel Ehrlich, Barry Lopez, Jeremy Schmidt, Frank Dufresne, Theodore Roosevelt, Doug Peacock, Mark Spragg, and editor Schullery provide glimpses of bears and their country through the expert eyes of some of our most gifted nature writers, past and present. Mark of the Bear is also one of the finest collection of full-color bear photography, featuring the outstanding images of distinguished nature photographers Jeff Foott, Thomas Mangelsen, and Tom and Pat Leeson.

Excerpt from Mark of the Bear: Legend and Lore of an American Icon, from Paul Schullery's "Introduction: For the Love of Bears:"

This is a book by people who have taken bears personally, people who have spent enough time in bear country to form something deeper than mere impressions of bears they’ve seen. Instead, these writers have emerged from their time in bear country—the arctic, the high west, New England, or whatever wild corner of the country they traveled—with something amounting to a viewpoint, even a position, on this whole complicated business of being with bears.

I say it’s a complicated business, and you may agree, but unless you extend your bear appreciation beyond where bears actually live, you just have no idea how complicated the bear is. Unless you pursue the bear through our literature, lore, and spiritual traditions, you can’t guess what a fantastic world of dreams and ideas the people who preceded you have constructed as they met, fought, and wondered about bears. The mythologist Joseph Campbell has written that Neanderthal bear-skull sanctuaries in Old-World caves are “our earliest evidence anywhere on earth of the veneration of a divine being.” This is an almost breathtaking revelation: the bear was a primary presence in early human religion (if you’ve met one, it’s not hard to understand why). We turned to it even before we found our way to the huge variety of superhuman and supernatural deities that peopled the world’s later belief systems.

Nor did the power of the bear fade when all these later belief systems flourished. Human ecologist Paul Shepard says that “the bear is the most significant animal in the history of metaphysics in the northern hemisphere.” Indeed, Shepard maintains that even when humans became largely urban and lost touch with wild landscapes, they didn’t really leave the bear behind; they simply brought it along in subtle, even subconscious forms, so that it haunts us as an image and an idea, somehow all the more powerful for being so remote. An endless string of modern fictional, animated, and commercial characters, all the way from Pooh, Paddington, Teddy, Yogi, and Smokey to the modern horde of care bears and gummy bears, seem to indicate that Shepard knows what he’s talking about. We are still making things of the bear, things full of intellectual tangles and twists that have transformed one of the world’s great carnivores into, among other things, a sweet-natured baby-voiced toy, a symbol of industrial forestry, and a logo for countless ski resorts, bars, and other human enterprises. With luck, we’ll always find new ways to imagine the bear.

Still, there’s nothing like a real bear, one you can watch and hear and even smell as it goes about its bear business. As I consider the writers in this book, I realize that, one and all, they have hunted their share of imagined bears in the books, lore, and oral traditions of many societies. But what distinguishes these writers is that they have also, to one extent or another, found their way back to a more immediate relationship with the bear. They have read and listened and learned, but then they went out and found a real bear.