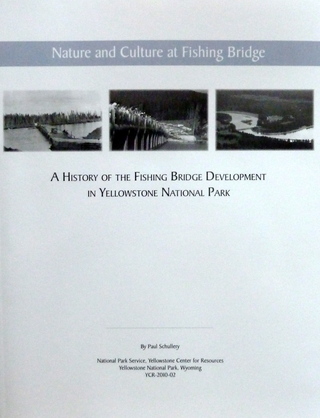 Paul Schullery wrote this book as a research and writing project as part of his National Park Service duties. This is the remarkable story, from pre-European times to the present, of human use and development of the landscape around the outlet of Yellowstone Lake, especially the popular park facilities that make up the village of Fishing Bridge. Starting with the important archeological background, which makes it clear that the lake outlet has been a popular site for human use, habitation, and ceremony for many thousands of years, Schullery traces the steady increase in the extent of human development at Fishing Bridge into the 1960s, when, over a period of a few years during an extraordinary reversal of agency philosophy, the entire development was determined to have been a bad idea all along. Schullery chronicles the long and politically explosive controversy that ensued when the National Park Service attempted to remove the development, and concludes the book with a consideration of the bigger issues of historic preservation and ecosystem management that Fishing Bridge embodies.

Nature and Culture at Fishing Bridge, having been produced in its entirety as a National Park Service report, is a public domain document, and thus provides no author's royalty. The entire book can be obtained for a nominal fee at the following on-line print-on-demand outlet:

A digital version of the entire book is also available, at no charge, from Greater Yellowstone Science Learning Center website: