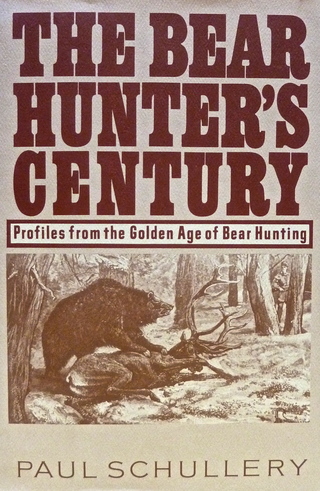 The Bear Hunter's Century: Profiles from the Golden Age of Bear Hunting

The years from 1820 to 1920 saw the sport of bear hunting at its greatest flowering. Much of the United States was still wild enough to support large numbers of black bears and grizzly bears, who in turn attracted a remarkable assortment of bear hunters. Some, like David Crockett and Theodore Roosevelt, became internationally famous. Others, like Wilburn Waters and Holt Collier, are almost completely forgotten except perhaps in their home neighborhoods where tales of their exploits still linger in cultural memory. The Bear Hunter's Century: Profiles from the Golden Age of Bear Hunting brings to life that hard and often strange lives of ten of these men, a group that included a Confederate General, a former slave, a president of the United States, and backwoods hermit and religious fanatic. Paul Schullery, well-known for his other studies of the history and culture of outdoor sport, has written a fresh and insightful book that respects the legends but looks beyond them at the historical record and ecological realities of these men and the bears they pursued. Not just a book of adventure (though the adventure is here too, in abundance), this is fascinating social history, a penetrating examination of the lore of bear hunting and Americans' changing relationship with wild nature. First published in 1988 as a dual main selection of the Outdoor Life Book Club, the book passed through multiple cloth, paper, and e-editions.

Excerpt from The Bear Hunter's Century: Profiles from the Golden Age of Bear Hunting, from Chapter Two, "John Adams:"

One of my favorite stretches of the highway on the interstate system is Route 80, as it goes west out of Sparks and Reno, Nevada. The road climbs quickly up and over Donner Pass, and then descends almost as quickly to the great inland valley of California, on into Sacramento, and then to the Bay area. It's a ride I never make without excitement about the setting: not the ski chalets, gas stations, and endless developments, but the obvious glory of the land itself. Within a few hours, I pass through a full range of life zones, a kaleidoscope of ecological opportunities, and I see, not the crowded housing of today, but the wonder that this place must have been 150 years ago.

Then, when steelhead and salmon ran into every little coastal stream all the way down to Ensenada, when elk and deer ranged over vast, unbroken tracts of wilderness, when native Americans and Spanish settlers lived with relatively little impact on the whole scene, and when the state's now-extinct symbol, the grizzly bear, roamed both the valleys and the high ranges, California would have been worth the walk. If I could choose to be a sportsman any place and time in the modern history of North America, I would surely choose California a few years before Sutter's Mill.

The most famous of all California bear hunters did not beat the great gold rush of the late 1840s and early 1850s; in fact, he was part of it. But he soon removed himself to remote parts of the state, and wandered out of the state to equally remote wildernesses elsewhere in the "far West," so that his experience wasn't far off from what it would have been in those same areas thirty years earlier. For his purposes as a sportsman and businessman, John "Grizzly"Adams, "The Wild Yankee," got there in time.

What he found was, by the standards of anyone interested in bears for sport, study, or simple admiration, a paradise. Even the towns of California had a tiny population. In 1848, the settlements contained fewer than twenty thousand people, including all Spanish Californians, native Americans, and "foreigners." No accurate records exist of the number of grizzly bears in the state at that time, but the number was unusually high because of the introduction of Spanish livestock, including cattle, sheep, and horses. Great numbers of free-roaming stock eventually became more or less wild, and, as they replaced the more wary native grazers on parts of the range, they also provided bears in the low country near the coastal settlements with an enormous new source of food. Storer and Tevis, in their superb book California Grizzly (1955), estimate that by the 1830s there were upwards of ten thousand of the bears in what is now California. They lived well and they occasionally provided Californians with wild sport. But within a century they would be completely gone, victims of an appalling surge of development that still pretty much continues.