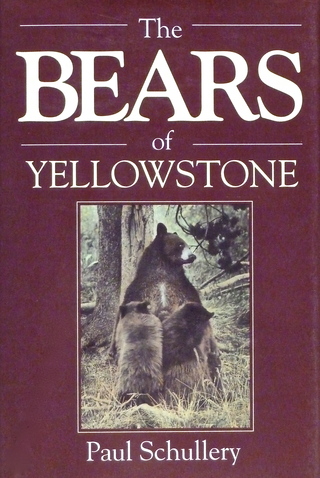 The Bears of Yellowstone

The Bears of Yellowstone appeared in three editions, 1980, 1986, and 1992. All three are now out of print, but the book is still widely available through on-line book dealers. All three editions were published in both cloth and paper editions. The third (1992) edition is by far the best.

The Bears of Yellowstone was the first book entirely devoted to the black bears and grizzly bears of the park since Milton Skinner's Bears in the Yellowstone (1925). It is divided into three parts: natural history, management, and the rich cultural history and folklore of the park's bears. The book remains one of the foundation source books on the history of Yellowstone bear management and the complex, colorful relationship that Americans have had with these remarkable animals. Profusely illustrated and thoroughly documented, The Bears of Yellowstone is still a lively, entertaining, and informative book. The author hopes eventually to revise it for a fourth edition.

"This book is the best overview of the complexities and difficulties of endangered species conservation that I have ever read."—Science Books and Films

"There is no better introduction to what is going on in grizzly country than The Bears of Yellowstone, by Paul Schullery."—Audubon

Excerpt from The Bears of Yellowstone (1992 edition), from the chapter 26, "Bears, Tourists, and Rangers: The Eternal Triangle:"

In 1953 a survey was conducted of Yellowstone’s visitors. When asked “were you aware while you were in Yellowstone that bear feeding is prohibited?” 95% answered yes. Feeding by visitors was quite common at this time, common enough to keep dozens of black bears along the roads. There were probably two big reasons for the easy lawbreaking. First, feeding was being allowed because rangers were only occasionally enforcing the law. People have an astounding capacity for doing things for no better reason than that they can get away with it. The second reason was (and is, for people still do it at every opportunity) that they could not see what was wrong with feeding a “poor hungry bear.” Most visitors apparently had no great sympathy for park ideals – if they even understood them – so they did not appreciate any distinction between a Yellowstone bear and a zoo bear.

Rangers have tried reasoning with visitors in many ways, but one of the most effective approaches to talking people out of bear-feeding (rather than fining them out of it) has been to make them realize that it hurts the bear. Pointing out to people that begging degrades the character (a wonderfully loaded expression) of a wild animal has worked. A report prepared for the United States National Park Service and the National Parks of Canada in 1969 summed up the power of this viewpoint: "The public generally is opposed to pollution. The roadside bear, no less than the urban rat, is a direct result of environmental pollution. Once the public becomes aware of this fact, we anticipate the demand to see demoralized beggar bears will be replaced by a demand to clean up the park environment and restore the bear to its natural habitat and behavior patterns."

The comparison with the rat is the clincher. It is completely appropriate, and, once heard, is seldom forgotten. Bears, of course, have no “morals.” The demoralization is actually our own, brought about by abuse of a valuable ethic.

Other more practical points can be made in the bear’s behalf. Black bears managed to survive on their garbage-enhanced diets, except those that were hit by cars, pestered by people until they injured somebody and then were destroyed as “dangerous,” or ingested too much harmful material. Bears feed by smell. If something smells interesting, or sweet, it will probably get eaten. Candy wrappers, broken pop bottles, and aluminum foil qualified, and were consumed in quantity. Glass, foil, cigarette butts, and film wrappers are not digestible, but they are all too common wherever people travel. Even feeding the bear “something good” was wrong, because it kept the bear there until it could be further abused. Worse things than accidental mistreatment occurred. A black bear can be in a pretty mean mood if he’s just been fed a firecracker.

Making people aware of the danger to the bear seems to be more useful than telling them bear feeding is dangerous to people. Even the parents of young children are willing to take horrible risks. Recounting a few injuries to them will make them cringe at the campfire program, and the family will walk very close together back to their tent afterwards, but in the brave morning light many will succumb. Visitors with children were responsible for some of the most outrageous behavior in the beggar-bear days. In the interests of photography children were told to go stand by the bear. Smaller children were placed on the bear’s back, and even smeared with jelly so that the bear could be photographed licking it off.

There is no getting around the horror of such behavior, the hundreds of injuries, and the callous treatment of very vulnerable wild animals, but if the point has not been made by now there is no hope, for the readers or the bears.